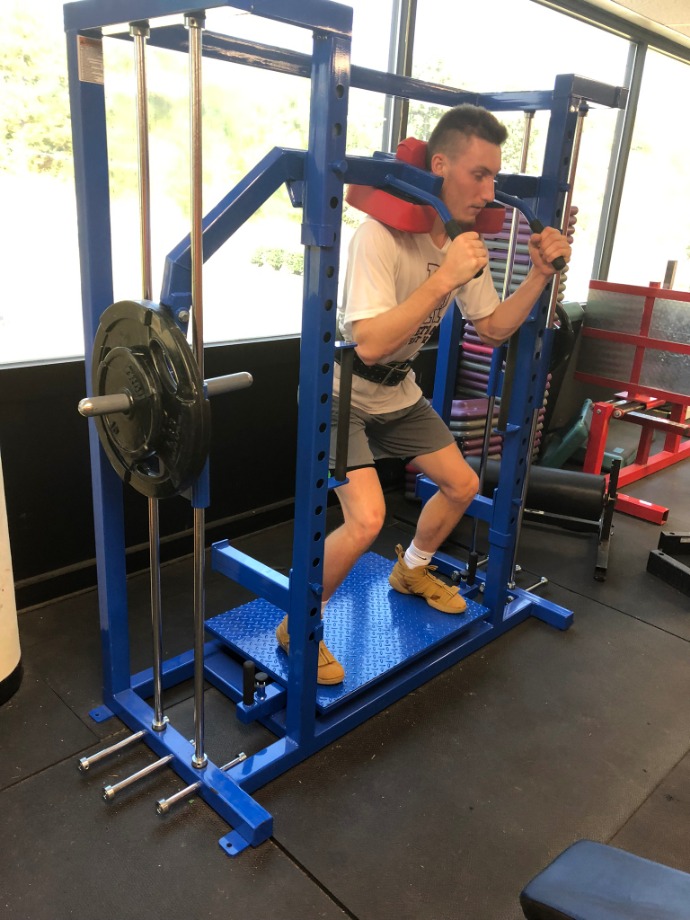 May be the biggest secret in strength training, and the biggest weapon to increase athleticism and power.

The machine has a tread plate that, when loosened, becomes a wobble board.

Safe, full squats are the key to add huge training loads to the hips and glutes, far beyond a parallel squat. This is why users are obtaining vertical jump, and speed and quickness gains unheard of in performance training.

'Forward lean' when squatting causes perilous shearing strain to the knees. The Natural allows the user to "lean back" throughout the whole movement from top to butt to the floor, while still defining their own personal movement path as there is freedom of movement in the machine, not like typical fixed-path squat machines.

It is completely understandable that someone would be hesitant to full squat, without knowledge of how The Natural operates.

Unstable training such as squatting on a Bosu ball and training on various boards has become fairly known. But they do not overload the muscles enough to produce meaningful improvements in increasing athleticism. Extremely heavy loads on these items are neither possible or safe. It is on The Natural.

And the yoke moves freely, so that the balance requirement is a perfect blend of difficulty to balance and yet completely possible and safe to do so.

Many core and auxiliary muscles are trained on The Natural Balance that are then utilized in superior jumping, quickness and running ability as compared to conventional squatting. These additional muscles have never before been targeted with such intensity and efficiency as they now are while being trained on The Natural Squat.

And we still believe in conventional squatting. In fact, a Natural Balance user's back squat will see improvements in poundage and technique.

As Strength and Conditioning Coordinator Rick Meyer of Bethel University in St. Paul MN states, when using The Natural Balance, "there are more muscles invited to the party". These additional muscles then are utilized when doing a traditional squat. Users of The Natural report a much stronger, rooted base when doing a regular squat.

© Copyright 2023 - All images and content are the properties of their respective owners.